They’ve been waiting in the wings, but now these guys are wingin’ it. On a wing and a prayer. They took me and my wingman under their wings…they’re flying without wings…but with wings. I’m gonna…clip their…wings. Err…something about Redbull? I’m out, that’s all I’ve got.

Branching out from their little food truck next to Brick Lane, The Orange Buffalo has taken-up residency at Hoxton Square Bar and Kitchen; I am not going to explain to you what it’s like there, décor and such, because if you are reading Public House then the chances are you have already been and you know exactly what it’s like. In fact, you were probably there being loud and young and enthusiastic when I was there on Friday night.

“They are like cocaine: communal; best devoured with a group of mates.”

The Orange Buffalo does – *spoiler alert* – Buffalo wings, which is an American style of cooking wings by deep frying them and then tossing them in sauces of varying degrees of heat. They also do a few chicken burgers and all the sides you would expect to be seeing – onion rings, fries (sweet, curly, or regular}, deep fried pickles, and all that jazz – but really, everything is geared towards them wings.

Hoxton Square is a good match for wings, because Hoxton Square is all about drinking, chatting, and smoking – and so are wings. They are a shared experience; a bucket of wings for one person is a lonely existence. Even if you order them as a side, you share them, you offer them around. They are like cocaine: communal; best devoured with a group of mates, with everyone getting stuck in; addictive, regardless of quality; leaves traces on your face so that everyone knows what you have been up to.

I love a good Venn diagram. Who doesn’t? They are underpinned by a wonderful simplicity and are capable of making incredibly complex ideas seem digestible. I bring this up mid-review, seemingly apropos of nothing, because the Venn diagram of “Things that describe themselves as New York Style” and “Things that describe themselves as New York Style and are shit” is essentially two circles placed directly on top of each other, with only the tiniest slither of an edge peering out. The Orange Buffalo, I discovered upon arrival, has a strapline of “New York Style Wings”. Interesting, I thought to myself, as I slowly nodded and rubbed my beard, was that tiniest of slithers about to get slightly bigger? 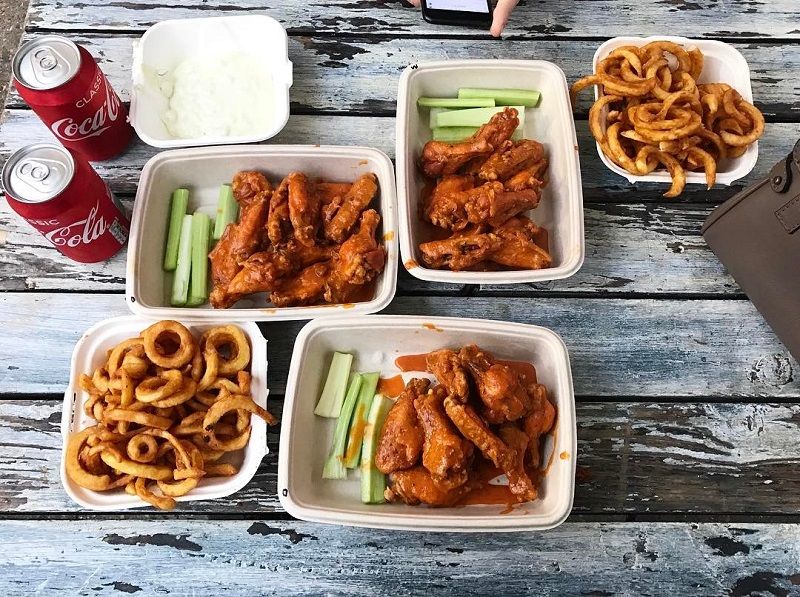 No. Here is the problem with deep frying wings: first of all, the wings that are used at The Orange Buffalo are not big, juicy, free-range, organic wings from comparatively happy chickens that have spent their short lives running around outside being all chickeny; these are tiny little wings from etiolated little chickens that have probably spent most of their life inside.
(I checked with the guys behind The Orange Buffalo and asked where they sourced their meat: was it local, free range, etc… They told me that they got it from a guy in Spitalfields, and that he was a family butcher, and that they had a great relationship, and that the meat was Halal, and that they sourced it from many different farms, and that they looked for the best quality, and that they loved shopping at Spitalfields, and that yada, yada, yada. Basically, a very long-winded way of saying no, it was neither free range, nor locally sourced, nor organic.)

Apart from not being great on the old animal welfare front, this means that because the wings are tiny, then, as with all high-temperature cooking, your window of opportunity between cooked and over-cooked is very small. These guys missed the window. In fact, I am not sure they even know where the window is, or what a window is, or what any of a window’s constituent parts are.

It’s also a tough job to season food, especially meat, that is going to be deep fried; unless you are coating the meat in something (breadcrumbs, batter) then most of the work is done after the frying. All of this meant that the wings themselves had very little going for them, and they were going to need help from those sauces, which they absolutely did not get. Tangy then spicy. Or tangy not spicy. Or just spicy. This was the extent of the four different orange sauces we tried (the names of which escape me; one was annoyingly called Woof Woof, I think. The rest I don’t remember and don’t care.)

The website tells me, in a very “This has been written by a marketing executive paid to come up with this sort of shit” way, that The Orange Buffalo brings “…fun, energy and sunshine into our food”; none of which, you will notice, are flavours. This is a shame, because that is just what they could have done with, some fucking flavour. Rather than being packed with pointless adjectives that mean fuck all, but are designed to be plastered all over plastic menus when the business makes it big and The Orange Buffalo franchises start popping up everywhere. Jesus Christ, there was even a section of the menu dedicated to merchandise. Fuck your fucking merch, concentrate on making tasty food.

Did the sides make up for any of this? I don’t know, because by seven o’clock on a Friday night they had run out of everything except fries. No slaw, no deep fried pickles, no onion rings – just fries. We got curly fries. They tasted like curly fries.

I was going to give The Orange Buffalo the benefit of the doubt and say that, you know, it’s only wings, and I am sure they would be fine with a few beers and some mates. But no, fuck that. If you are going to open up a business that has restaurant aspirations, you need to do a bit better than badly made pub snacks that are good for soaking up alcohol.

Another look at the website informs me that The Orange Buffalo was “Double Winners of Wingfest London”. Two things: firstly, which cunt invented Wingfest London? Because you have got far too much time on your hands boy, go volunteer at your local homeless shelter. And secondly, this is further proof that it is never the best things in life that garner praise, only the best marketed.

Oh, I forgot, we had a chicken burger as well. Also shit.