Statistics from Macclesfield police show that Treacle Town enjoys the lowest crime rate in the country. Or so they thought!

So when Detective Inspector Albert Thrush of the Macclesfield Fraud Squad discovered that Macclesfield had been the victim of an audacious identity theft the discovery sent shock waves throughout the force. Ironically it was the lack of any criminal activity that led to this disturbing discovery because it meant that officers at Macclesfield police station could pass the time surfing the internet.

‘We like to visit the websites of other forces that have high crime rates and tell ourselves how lucky we are,’ explained DI Thrush. ‘Especially police forces in America who are inundated with shootings and other major incidents. So imagine my horror when one of our officers discovered there was a town called Macclesfield in North Carolina. After hearing about it I immediately followed the guidelines laid down by the Home Office and contacted the American FBI who launched an investigation.’

Swift action like this is a hallmark of the Macclesfield force and that night DI Thrush flew to America and accompanied the FBI when they interviewed the Mayor of this other Macclesfield.

‘He claimed they’d come up with the name first,’ said DI Thrush. Then, using the traditional idiom employed by his heroes, the Flying Squad, DI Thrush told me he’d proceeded to stitch the man up like the proverbial kipper.

‘I showed him a Photostat copy of the Charter issued in 1261 which gave us the status of a Borough. I then reminded him that back then America was still owned by the Red Indians. At this, the Mayor threw up his hands and told me he was bang to rights and invited me to feel his collar.’

The Mayor of Macclesfield North Carolina is currently awaiting extradition. 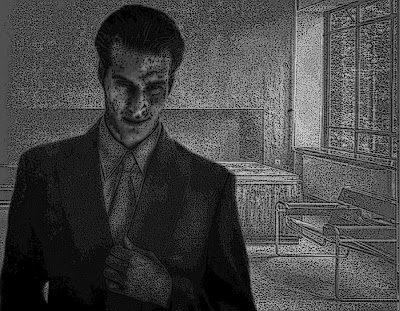 DI Thrush shown in his office.